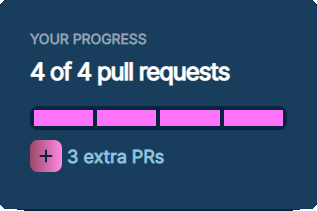 This year I'm no longer getting paid to write open source code, so I had to actually think about what PRs to make. While I spend a good chunk of my weekends writing code, it's generally for one off hobby projects where I'm the sole contributor, and branching only makes sense for longer running experiments; generally I'm just committing directly to master.

I knew I wanted to update my site-crawler site to support scraping more than one type of website/book so that I could add another book, but coming up with the other two PRs proved more challenging. I didn't want to just cheese things with updates to readmes, but I didn't have another project that fit into discernable PR chunks (as opposed to spending a couple weeks on a larger branch).

In the end I decided to redo the roman numerals kata in Kotlin, and actually complete it. This chunked nicely into PRs and gave me the two I needed for Hacktoberfest, plus a couple extra. Finally, near the end of the month, I added a final PR for better collision in my platformer experiment/game Vex.